Here is our (rough) translation of the article that appeared in the May 16, 2014 issue of the weekly Nishi no Kaze. Since then, to my great joy, we married.

Okutama Wasabi to the World

David Hulme (66), really fascinated by Okutama wasabi, moved to the hills of Kawai this February with Satoko Kudo, his partner. Hulme discovered the Okutama area during hikes, and could not forget the sight of wasabi terraces, with their precise rows of beautiful green and pure running water, deep in the mountain gullies. He wondered about what kind of person maintains such remote plots in the rugged hills. At the time, he was editor-in-chief of Eurobiz Japan, the monthly publication of the European Business Council in Japan. He contacted Kasuo Takeuchi, head of the Okutama Wasabi Farmers Association, with a view to writing about wasabi in the magazine. Takeuchi arranged interviews with wasabi farmers, and during interviews Hulme learned more about how wonderful genuine Okutama wasabi really is, and that the best wasabi requires a constant flow of water at a temperature around 12 degrees Centigrade. And that is why it is grown high in the mountain gullies. After the story was published, the wasabi farmers began inviting Hulme and his partner to various events.

“Takeuchi-san and all the others were so kind, generous and willing to help,” Hulme says. “Eventually, we decided to move in here.”

Hulme was born in 1948 in Melbourne, and first visited Japan from Hong Kong, where he worked as a freelance writer, in 1980.

“I like the flavor of wasabi,” he says. “Of course, I have known about wasabi from a tube for a long time, through eating sashimi.”

Asked for one word to describe freshly ground Okutama wasabi, he says: “Subarashi!”

“Compared to Nikko or Karuizawa, this area is not as well known as it should be. Now we are working to promote Okutama wasabi, and I hope what we are doing will influence many people,” Hulme says.

“I would also like to have my own wasabi patch, if possible. At first I can learn by assisting other wasabi farmers.” 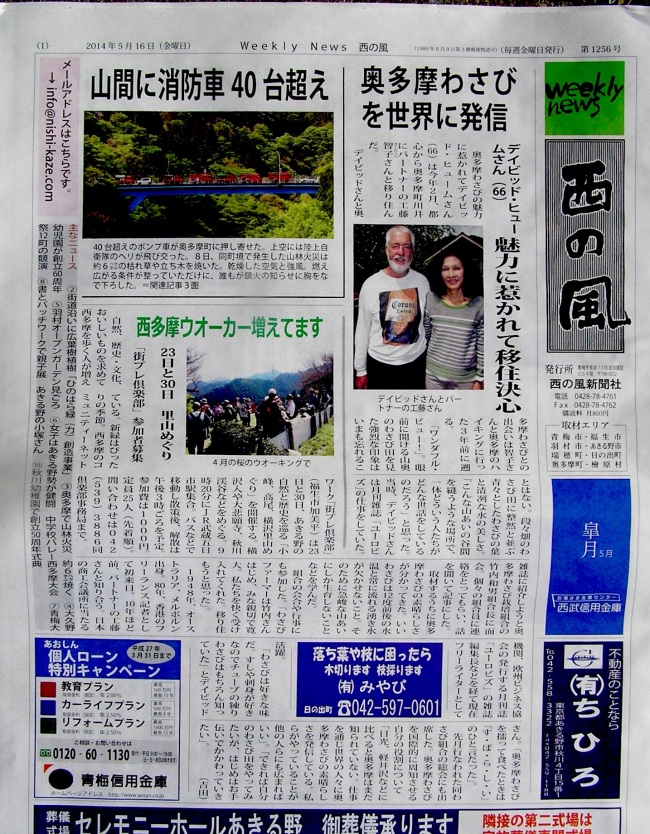 This entry was posted in Life in a Village.